Dutton up against it as new Libs leader

Peter Dutton, the former defense minister under Scott Morrison, has been elected unopposed as the new leader of the Liberal Party. It comes as (of course) Labor took the national reins in the federal election last week, prompting a need for the Libs to make some drastic changes internally.

The week before the election, we did some polling for The West Australian to see how ScoMo and Albo were fairing among West Aussie voters (voters who were touted from the start to likely ‘make or break’ this election), and the results didn’t look great for ScoMo – a prophecy fulfilled just a week later.

Well, we did some more polling for The West this weekend and things don’t look a whole lot better for his successor, Peter Dutton…

Our poll of 1,354 West Aussies revealed that only 19% think he’s a suitable candidate to replace Morrison as the new head of the Liberal Party. The front page of today’s newspaper tells the story pretty well, a poetic inverse of McGowan’s ‘Mr 91%’ status… 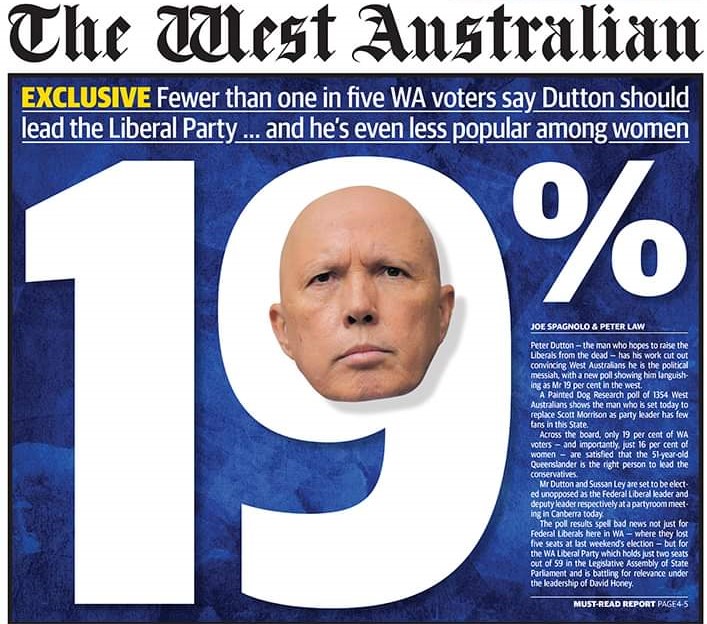 The results don’t look great for a party who needed to make some drastic changes within to start appealing to some of these key demographics and voters, particularly women – so naturally this poll, like most we do, is making waves across the political news sphere today.

Check out the snippet below from Sunrise this morning! It highlights just how important the ‘female factor’ is and what Dutton and his team have ahead of them if they want to turn things around in WA for their party.