…and public playgrounds for the kids is the first thing they want to open back up. 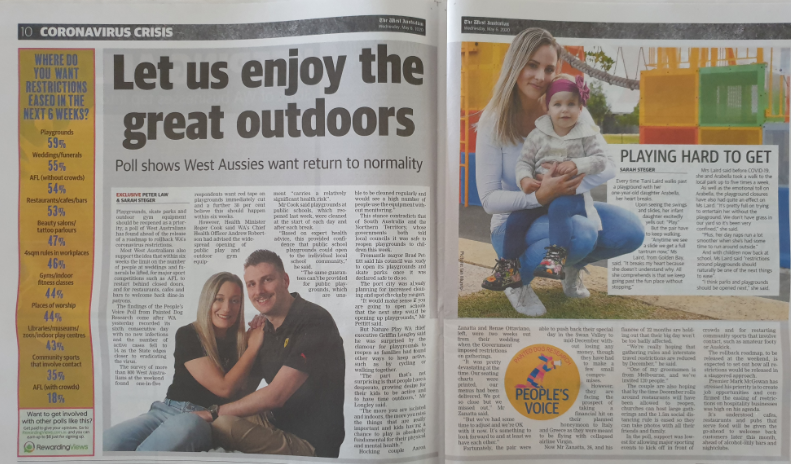 We spoke to 805 West Aussies last week and 59% of of them want playgrounds and other similar outdoor activities back up and running within the next 6 weeks – and one in five think they should open right now!

Support was also highest to lift restrictions soon on the number of people allowed at weddings and funerals; to get sports events like the AFL back up (without crowds, of course); and to re-open restaurants and cafes for dine-in patrons.

The poll was conducted just days before the State Government announced upcoming changes to social distancing restrictions, and it looks like many of these desires are set to be met!

While there isn’t as much clarity on opening up public playgrounds, the number of people allowed at weddings and funerals will be lifted to 20 indoors and 30 outdoors, and restaurants can now operate for dine-in for up to 20 patrons.

See what people think about a range of restrictions below…

We’ll be keeping our fingers crossed for that vaccine sooner rather than later. In the meantime, make sure to follow along with our weekly People’s Voice blog updates to see what’s going on in the state.

And as always, stay safe and be kind to one another.

The People’s Voice was designed to help anyone – businesses and individuals – ask questions and understand the thoughts and feelings of West Australians.

People’s Voice gives you the chance to ask both current and potential customers what their attitudes and opinions are towards your brand or products and have the ability track these as we navigate through these unprecedented changes in our world.

To find out more information about it and how you can get involved, visit the People’s Voice website: https://painteddogresearch.com/peoplesvoice/