Welcome to our Weekly Staff Spotlight! Each Friday we’re throwing the spotlight onto one of our Painted Dogs and they answer the questions you’ve always wanted to know! This week’s spotlight falls on Vienna; we gave her a few fun questions to answer so take a read below to get to know her a little better! 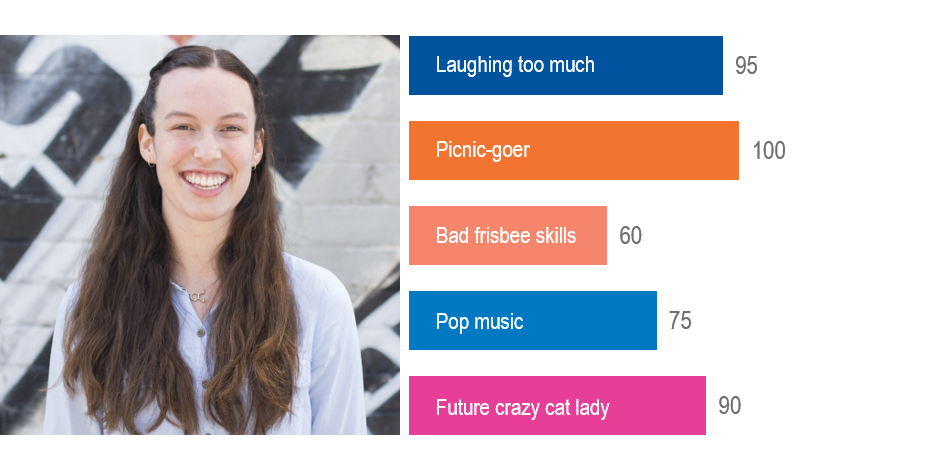 You can only chose one TV series to watch forever, what do you chose and why?

Given I’m such a TV addict it’s a tough call but I’d have to say Community. I’d have to pick a comedy because laughter is my go-to when I’m stressed and despite the fact that I’ve re-watched Community to the point that I know most of the punchlines before they happen, it still never fails to make me laugh. Other sitcoms have some great laugh out loud moments, but for me Community just consistently performs (at least for the first three seasons). Not to mention, a lot of other sitcoms can be very formulaic and get repetitive when you binge watch them (trust me, I’d know) but Community has so much diversity between the episodes because it parodied so many different styles and shows. PLUS I still haven’t actually seen the sixth season because I’d heard such bad things and didn’t want it ruining my perception of the show like season 9 of Scrubs, so there’d still be some fresh content for me if I got desperate.

Thinking back to your very first day at Painted Dog Research, what were your thoughts and feelings you had?

I wish I could say something cool or inspiring but honestly I was mostly afraid haha. Market research was the only thing I could see myself doing as a job once I left uni but I had no real idea what the real job would be like. I remember walking in on the first day of my internship thinking “God I hope I like this or I have no idea what I’m going to do”. I also knew that making a good impression was probably my best chance of landing a job after uni (I was in my final year) so the pressure was on. I also remember being confused because right at the start of the day I was told that someone called “Stevo” was going to give me my first job to do but then another person came over and introduced themselves to me as “Matt” and gave me work to do. This “Stevo” person never complained so I figured arrangements must have changed. It wasn’t until a week or so later that I discovered Matt’s full name was “Matthew Stephen” and “Stevo” was just a nickname for him.

You’re invited to lunch with a person you’ve always wanted to meet; who is it?

If you’d asked me this a couple of years ago I probably would’ve said “my future husband” because I was single and desperate but now I have a boyfriend and if anyone other than him showed up as my future husband I would CRY so that makes this a tough question. I also have to factor in that time in year 5 when I met a celebrity I had a huge crush on (does anyone else remember Dean Geyer from Australian Idol?) and was awestruck and completely lost the ability to speak *cue anyone that knows me being shocked that I shut up for once* meaning I couldn’t meet a celebrity. I’m tempted to say “myself from the future” but I’ve seen Back to the Future enough to know you don’t mess with time travel.

…Given the above, I’d probably say my granddad on my dad’s side. He died before I was born so I never met him but I’ve heard so many stories about him and his life. He was born in the year 1900 and lived until the 1980’s if that gives you any idea of the tough times he lived through and the wealth of knowledge he accumulated. Most of all, I’d love to meet him because he taught my dad to value hard work and helping others and that’s been passed onto me. I’d love to meet the man that really embodied that.

When people come to you for help, what do you they usually need help with?

The first person that springs to mind is my mum but that’s usually just to bring the shopping in. Aside from her, the people that need my help are usually looking for advice. Even though I’ve only spent 21 years on this earth, I’ve spent a lot of that being fascinated with the behaviour of others and their reasoning behind it (not surprising given my line of work). Instead of just putting up with my curiosity, I’d often ask questions and given my embarrassing habit of oversharing, people often felt comfortable opening up to me. As a result, I learnt a lot without having to experience everything first hand and now when others come to me, I can often help them despite not having personally been in that situation. People always say to learn from your mistakes but there’s a lot to be said for learning from the mistakes of others.