We’re royally confused – do people want a public holiday or not?!

With the passing of Her Majesty Queen Elizabeth II, Aussies are set to pay their respects with a National Day of Mourning this Thursday – with a public holiday to mark the occasion. And while an unexpected public holiday means a welcome day off work for many, others are not so happy about the decision.

There are reports and conversations raising a number of reasons people don’t support the idea of the public holiday – from finding it an inconvenient and last-minute change in their schedule, to not supporting the idea of a day in celebration of the Monarch. So naturally, this sparked our curiosity… how many people really don’t want the public holiday this Thursday? Is it a loud minority speaking out against it? Or is this resistance more widespread?

We took our questions to the people of Perth over the weekend with a poll on RewardingViews. In total, n=1,475 West Aussies were asked if they supported the public holiday to commemorate the Queen’s death and what they think Australia should do now – stay as part of the Commonwealth or take this opportunity to step out on our own and become a Republic.

Overall, the results are clear. Almost 4 in 5 (78%) are pretty pleased about the idea of the public holiday Thursday – with 19% just happy to have the day off and 59% believing it’s the right thing for us to do as a nation to honour the life of Her Majesty. However, some felt differently, with 10% feeling like the whole ordeal is just an inconvenience for them (think about cancelled appointments, kids home from school and needing childcare and businesses either needing to close or forced to pay their staff penalty rates). Further to this, just over 1 in 10 (12%) disagree with the idea of Australians celebrating or participating in the Monarchy altogether… 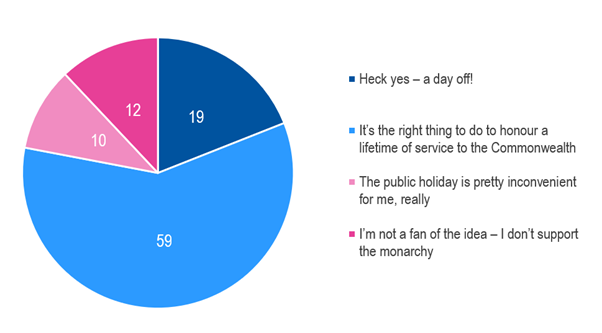 On that note, when it comes to what West Aussies think our country should do now that King Charles III is the Head of State, there is a bit more of a divide. While just under half (45%) are happy to continue as part of the Commonwealth and be governed by the British Monarchy, around 1 in 3 (31%) think this is Australia’s time to become a Republic – and this push to become a Republic is mainly driven by those aged under 35. Interestingly though, 24% couldn’t care less either way – again mainly driven by younger people. 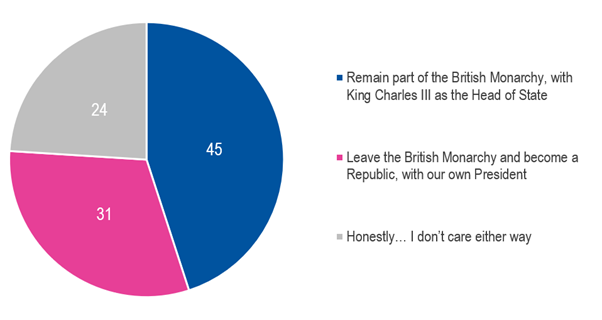 To have YOUR say and take part in our next poll, sign-up to RewardingViews: https://www.rewardingviews.com.au.