As a leading research company, it’s important we keep our ear to the ground about what’s going on in the community.

And with so much currently happening with coronavirus and our collective response to it, it’s more important than ever!

Fortunately, our People’s Voice survey helps us do just that. We’ve once again teamed up with RewardingViews.com.au and The West Australian newspaper to hear from almost 900 Aussies on how they’re feeling about the current state of COVID-19, what they’ve done so far in response, and how they feel about the way forward. 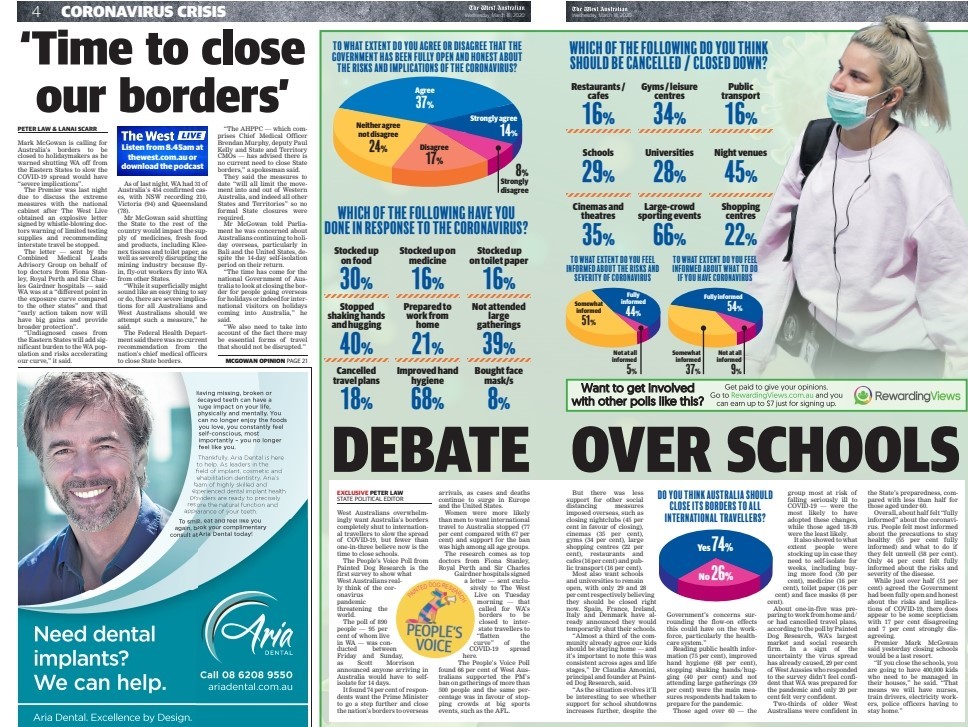 We’ve boiled down some of the more interesting findings from what people think. Explore them below!

Q1. Which of the following, if any, have you done in preparation for or in response to the coronavirus?

Q2. Which of the following, if any, do you think should be cancelled / postponed / closed down as a result of the coronavirus?

Q3. How confident do you feel that WA is prepared for a pandemic?

Q4. To what extent do you agree or disagree that the government has been fully open and honest about the risks and implications of the coronavirus?

Q5. Do you think Australia should close its borders to all international travellers?

Things are happening fast, and updates and advice change rapidly as new information comes to light. We’ll be checking in with the community regularly over the coming weeks and months – in the meantime, stay safe and be kind to one another!

Want to get involved with other polls like this? Get paid to give your opinions. Go to rewardingviews.com.au and you can earn up to $7 just for signing up!