Getting WA to “Start talking”

Painted Dog caught another mention in the rags recently for an article published in The West, for The West. WA’s iconic newspaper recently launched its first major brand campaign in three years, aimed at encouraging the community to get involved and “Start talking.” Founded on the idea that “nothing starts conversations in WA like The West Australian,” the new positioning comes with a vibrant, fresh new look while still retaining traditional elements synonymous with paper. Painted Dog played an important role in the brands’ new positioning, conducting focus groups and working closely alongside the creative agency as part of the research process. To read the full article, including Justin “Schhhhhhherri’s” quotes on the topic, click on the article below. 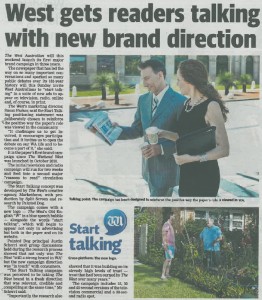