A generational shift in the Australia Day debate

With Australia Day just around the corner, only half of young West Aussies believe the celebrations should remain on January 26.

Our recent poll, conducted exclusively for The West Australian newspaper in collaboration with rewardingviews.com.au, revealed a clear generational shift in attitudes towards celebrating Australia Day on January 26.

For those who don’t know (which our poll suggests is around 25% of West Australians), Australia Day is currently celebrated on January 26 because it marks the anniversary of the 1788 arrival of the First Fleet of British ships at Port Jackson, New South Wales, and the raising of the Flag of Great Britain at Sydney Cove by Governor Arthur Phillip.

For many Indigenous Australians, who occupied this land for more than 50,000 years before British arrival, January 26 remains a day of mourning, representing the brutal end to the Australia they knew before colonisation. It’s why some Australians refer to January 26 as ‘Invasion Day’ and hold rallies of protest across the country. In fact, many councils across Australia have changed the date they celebrate Australia Day as an acknowledgement of what that date in our history really means to a lot of Australians and to make it more inclusive for all to celebrate.

It’s therefore no surprise that every year social commentary is inundated with debate about whether the date of Australia Day should be changed and whether it is, in fact, offensive to Indigenous Australians as it stands.

“There’s a clear generational shift in attitudes around this discussion, with older West Australians more likely to want to keep celebrating Australia Day on January 26″, says Matt Stephen, our Head of Social and Health at Painted Dog Research. “Younger folks are less supportive of keeping the date the same and that doesn’t seem likely to change.” 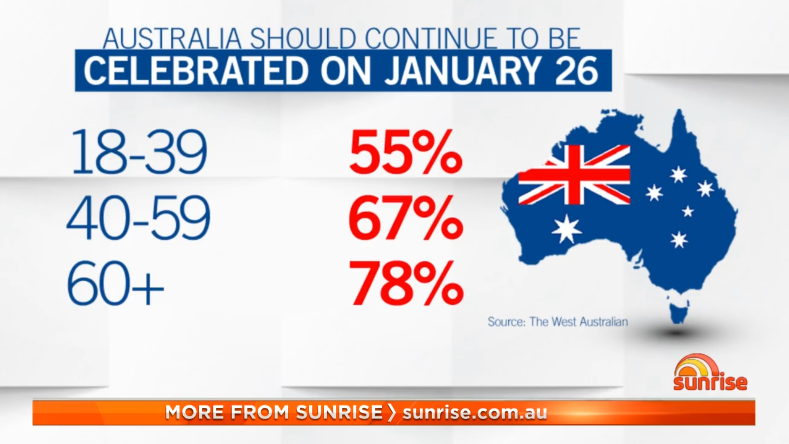 Our poll results on Channel 7’s ‘Sunrise’ this morning.

West Aussies are even more split when it comes to whether celebrating Australia Day on January 26 is offensive to Indigenous Australians. Overall, 37% think it’s offensive, while 38% disagree and 25% are neutral on the issue.

“Whether it’s offensive to celebrate on January 26 is really polarising”, says Matt, “but we see a similar pattern emerging here between different generations. Younger people are significantly more likely to think the current date is offensive to Indigenous Australians, which echoes the generally more progressive stance of younger generations on issues like this.”

Regardless of which side of the aisle you stand on this debate, it seems like it’s here to stay… especially as younger generations start to occupy and influence more of the social and political commentary in our country. West Coast Eagles young-gun Nic Naitanui even threw his support behind our poll with a heartfelt post on Twitter calling for WA to lead the way in exploring a more inclusive date to celebrate our great country – and even ran his own poll among his followers.

As the tides shift, is it time to seriously explore changing the date of Australian Day?