Painted Dog conducted a survey in January for the McCusker Centre for Action on Youth Alcohol, a continuation of a series of studies to assess community response to a range of issues concerning alcohol and young people.

Over 1,000 West Australians participated in the survey and gave their opinions on several of the recommendations made in the independent review of the Liquor Control Act released by the WA Government earlier in the month. Below is an article published in the West Australian on Thursday 20th February 2014 that covers some of the findings. 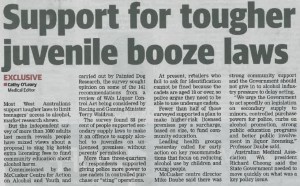